PlasticBrain is a display device using a 3D realistic model of the brain.

It can display functional activity (fMRI, EEG, MEG, NIR, PET…) or any other information (connectivity, anatomical atlas), to visualize data, teach or for biofeedback-therapy. 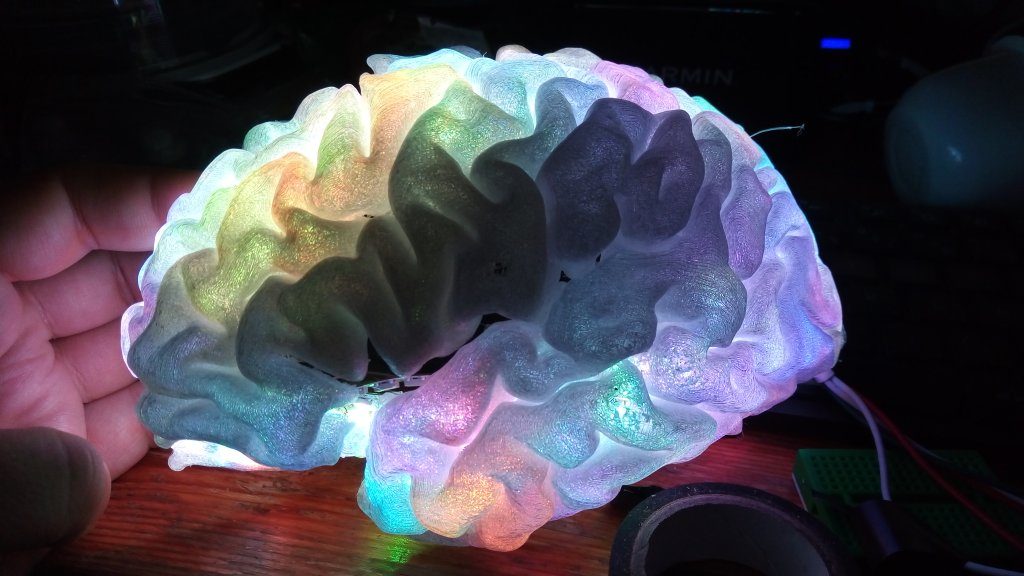 It is built from a 3D print of a human brain segmented from an MRI, some RGB LED strips and an Arduino UNO to drive the display.

LEDs are either directly put inside the hemisphere or outside on a matrix (with the light being guided inside the model by optical fibers).

I founded a small company to develop the hardware and software aspects and to sell the device. Integration with existing data acquisition systems (in neuroscience research, clinical, or DiY systems) can be done on-demand. Contact : manik <dot> bhattacharjee <at> free.fr 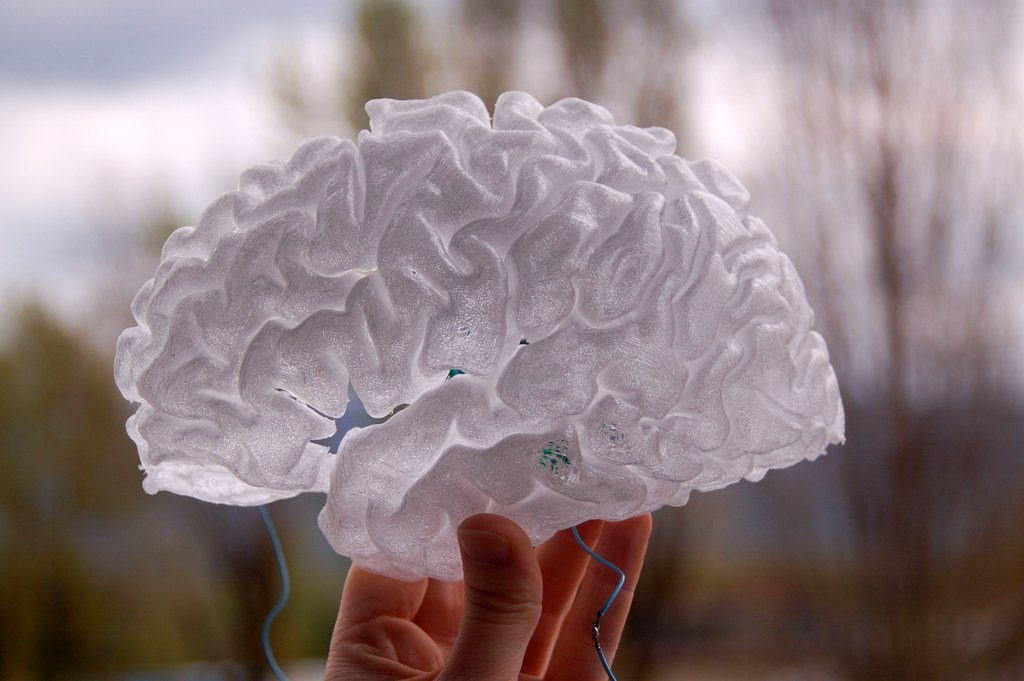 From MRI to 3D printing :

Use individually adressable RGB LEDs (e.g. WS2812B) strip. At first we wanted to get them as dense as possible for better spatial resolution (now 144 LEDs per meter) but the light in the prototype is diffused in a large area so less dense LED strips work as well. According to the scale of the model we need between two and three led strips per hemisphere but for the prototype we used one per hemisphere.

Warning LEDs can get relly hot, beware of overheating !

In 2014/2015 Pierre Deman bought an Arduino to synchronize a clinical SEEG recording system with a stimulation software in Grenoble, France.

As we had this component available, we realized that because 3D printing and DIY electronics were now available to the general public, we could build an old idea of mine : display on a realistic 3D brain its activity, realtime or afterwards (for example to replay an epileptic seizure in slow-motion), or use it to display anatomical regions.

In 2016 we had a 3D printed hemisphere with LED strips and we could control the display from a computer. We modified IntrAnat software to be able to drive PlasticBrain but it still needed some work.

In 2018 having moved to Geneva, we proposed the project to the 2018 HUG Hackathon (Geneva University Hospitals) and were joined by Michel Tran Ngoc and Vincent Rochas. We used an EEG headset streaming the data in realtime with LabStreamingLayer to another computer running IntrAnat. We received the data, and filtered it in realtime. We needed to locate the EEG electrodes in relation to the brain so we used a 3D scanning Android app to build a mesh of my head with the pictures of the EEG headset as a texture. We wanted to register it to the MRI-extracted head surface and automatically detect the electrodes from the texture. Then using Cartool to compute the inverse problem allowed to reconstruct brain activity on my cortical surface. We also wanted to display realtime activity in IntrAnat, then locate the LEDs in the cortical surface and map the activity of the brain onto them. We did not achieve the full prototype due to the limited time (36 hours) but multiple parts were working. Final Presentation and source code on Github are available.

In 2019 I partipated with PlasticBrain to the 2019 Geneva Brainhack hackathon. New participants joined me during 36 hours : Victor Ferat, Jelena Brankovic, Gaetan Davout, Elif Naz Gecer, Jorge Morales and Italo Fernandes. This time we had a less ambitious goal: using a standard brain model (and not my MRI used to print the brain) and a standard EEG electrodes layout (no measure of the real position of the electrodes) we solved the inverse problem with Cartool, projecting activity from the EEG to cortical sources. We built the 2nd hemisphere to have a complete brain and using the arduino we lit one by one the 192 LEDs, clicking on its estimated location in Cartool on the brain model. A script was then used to compute a matrix projecting source activity to LED values and the Arduino applied a colormap. The signal was filtered and the power in the alpha band was computed as it is the easiest way to show a change in brain activity : closing the eyes increases alpha waves power whereas opening then lowers it. We had a working prototype at the end of the hackathon (see video higher in this page). The code is available on github.